We've gathered a number of Neatline exhibits to help stretch your imagination. Look below for projects in history, literature, and contemporary space and place.

Do you have a public Neatline exhibit you'd like to share? Please use our submission form, and we'll include your work in our Exhibit Showcase. We're always eager to see what the Neatline community is building.

The Nicolay Copy of the Gettysburg Address

The Nicolay Copy of the Gettysburg Address

Read more about this project on our blog.

The Black Liberation 1969 Archive is an Omeka archive "designed in support of Black Liberation 1969: Black Studies in History Theory and Praxis taught at Swarthmore College by Professor Allison Dorsey," and produced through the joint efforts of Nabil Kashyap, a librarian, and several students. This Neatline exhibit, a part of the larger archive, maps the 1969 sit-ins at Swarthmore, creatively using custom annotations to provide a timeline for the events. 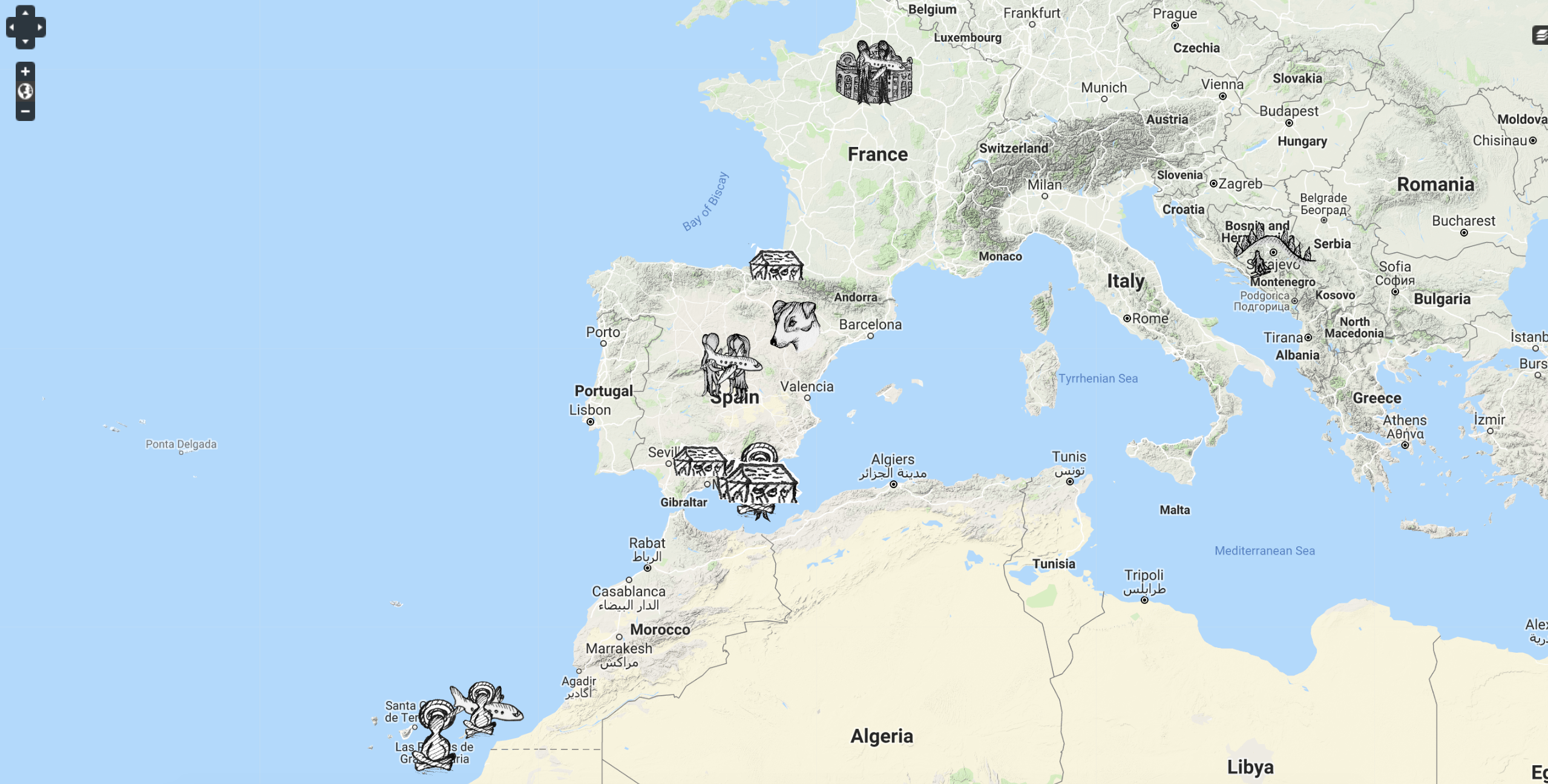 The Possibility of an Island

The Possibility of an Island

Stephanie Posthumus and Amy Goh, of McGill University, use Neatline to map the life of one of the characters from Michel Houellebecq's novel, The Possibility of an Island, in this exhibit, making impressive use of custom point images. 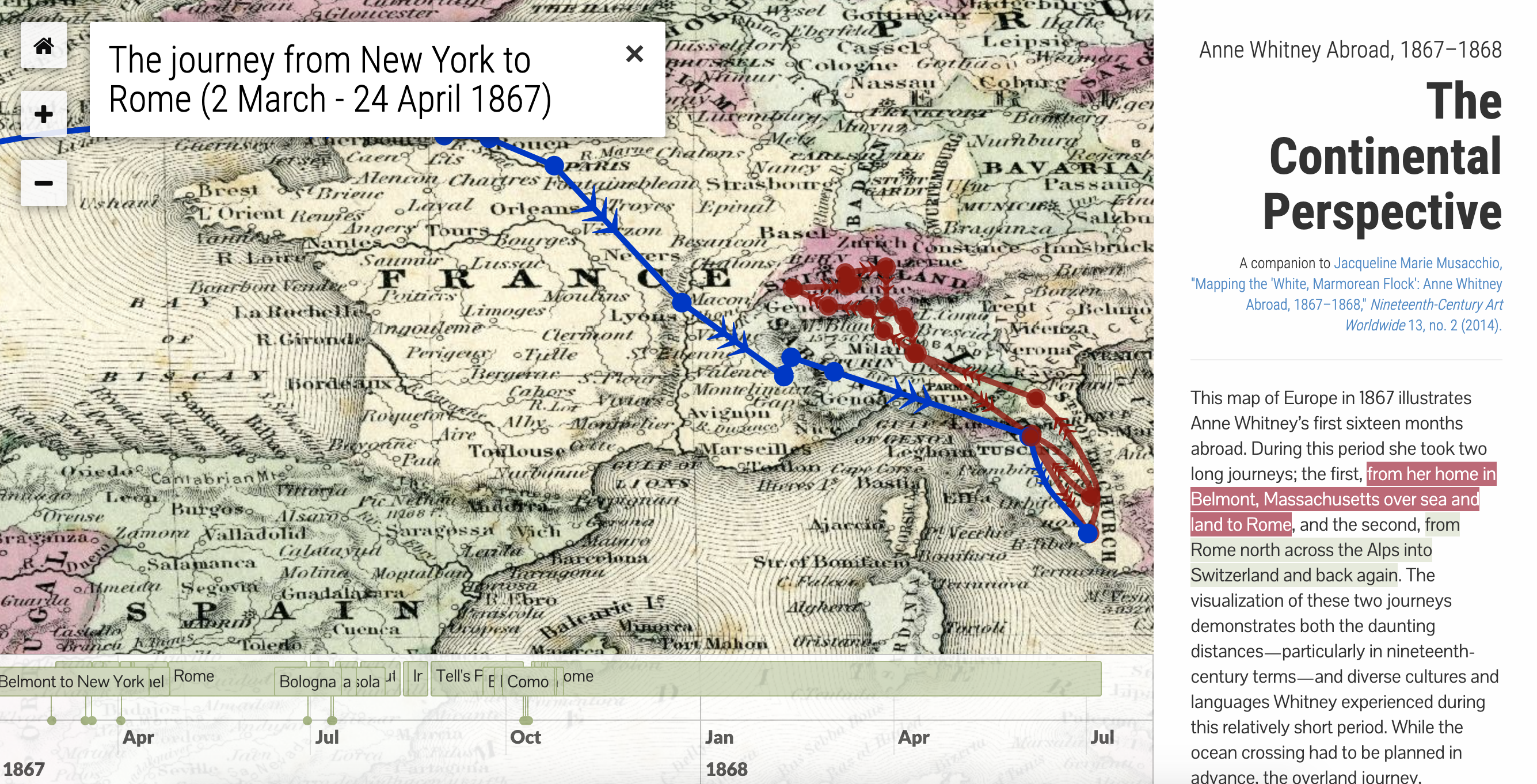 by Jacqueline Marie Musacchio, with Jenifer Bartle and David McClure, assisted by Kalyani Bhatt. This project was made possible through generous funding from the Andrew W. Mellon Foundation’s Digital Humanities and Art History series. Link provided with the permission of the author.

The article, maps, and timeline components of this project illustrate the first sixteen months of Anne Whitney’s life abroad in a macro and micro fashion. In the language of the Neatline plugin used to generate the interactive features, the maps and timeline constitute two “exhibits”; where relevant, these exhibits are linked to the article in both the main text and endnotes. Although the article tells a complete narrative on its own, readers seeking more information, or the manuscript sources for my analysis, can link to precise points in the exhibits. While I hope readers will use text and tools together for the most complete experience, they can be accessed independently. In fact, doing so will yield even more information, since there are many records in the exhibit that are not linked to in the article, but which provide a broader and richer context for Whitney’s experience and indeed that of other female artists abroad of this era.

This exhibit provides a broad look at Whitney’s travels across the European continent. A brief narrative description of her activities during this period, found in the column on the right, links the names of the cities and towns Whitney visited to the appropriate places on the map and timeline as well as to contemporary or near-contemporary images. The user can move through the exhibit by clicking on the highlighted text on the right, the points on the map, or the timeline entries. These first sixteen months include two distinct journeys: Whitney’s trip from New York to Rome (March–April 1867) and her movement around Europe that summer and fall (June–October 1867); she remained in Rome from April to June 1867, and again from October 1867 to July 1868. The first two links in the article, indicated by a globe icon, correspond to these two journeys, which Jenifer visualized by creating lines and arrows on the map between each city or town.

The second exhibit provides a more detailed view of Whitney’s life abroad. It has additional layers that allow users to zoom into and explore historical maps not only of Europe but also of Massachusetts, Switzerland, Paris, Rouen, Florence, Bologna, and Rome. This exhibit has a five-track timeline with links to individual records that contain excerpted texts from Whitney’s letters, as well as related photographs—some of which were collected by Whitney herself—to tell a more complete story.

Mapping the Catalogue of Ships

Mapping the Catalogue of Ships

By David McClure | Map tiles by Mapbox | Map from Wikipedia. Built for the NEH Workshop Digital Methods for Military History at Northeastern University.

Charles Minard’s 1869 diagram showing the gradual depletion of the French army over the course of Napoleon’s 1812 invasion of Russia is a seminal work in the history of information design. This exhibit was built by georeferencing a scan of Minard’s diagram, and then vector annotations were traced out on top of each of the individual segments that represent the deteriorating size of the Grande Armée over the course of the invasion.

The small interactive chart was made using d3, that plots out the size of the French army over the course of the ~5-month interval of time between when Napoleon crossed the Neman on June 24 and when that last little bit of the army stumbled back out of Russia in December 14.

A (Digital) Declaration of Independence

A (Digital) Declaration of Independence

Read more about this project on our blog.

Perspectives on the Haram

Perspectives on the Haram

"Perspectives on the Haram" is an exhibit created by a group of University of Virginia undergraduate students for a course in the School of Architecture, taught by Professor Lisa Reilly. The exhibit uses images and texts from travel accounts to details the changes of the Haram Mosque over a thousand years.

Jeddah: Gateway to the Hajj

Jeddah: Gateway to the Hajj

"Jeddah: Gateway to the Hajj" is an exhibit created by a group of University of Virginia undergraduate students for a course in the School of Architecture, taught by Professor Lisa Reilly. The exhibit uses first hand accounts to depict the experience of the Hajj as it has been shaped by changing modes of travel in three different time periods.