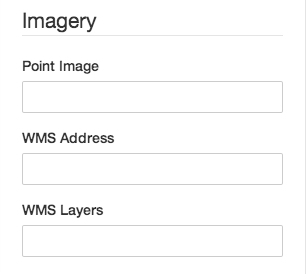 By default, points on the map are represented with circle graphics, the size of which can be configured by the “Point Radius” field in the “Dimensions” field set. This field makes it possible to replace this default representation of the points with any random, web-accessible image. This makes it possible to place effectively any kind of graphic on the map - pins, icons, image thumbnails, etc.

Point images can be the web-accessible location of any image. For example, to use the Neatline logo:

Important: Since we’re really just changing the cosmetic appearance of the points, there are some restrictions:

Tip: When preparing images for use as point-images, try to use image types like *.png that support transparency. Otherwise, you’ll have unsightly white or black boxes filling in the negative space surrounding the graphics.

The location of a web-accessible Web Map Service server like Geoserver. This field has to link directly to the WMS API endpoint on the server, such as:

A comma-delimited list of layers on the served defined by “WMS Layers,” such as:

Once a WMS address and layer name has been entered, Neatline will automatically overlay the requested layers on top of the base layer. WMS layers react to many of the same styling, visibility, ordering settings that can be used to configure the behavior of regular vector annotations: